The factory must be CO2-neutral

Perhaps you don’t really think about the fact that it says rapeseed germ oil on the Lehnsgaard bottle. The fact that rapeseed germ oil from Lehnsgaard has become one of the best-known gourmet food products from Bornholm is based on the word germ. But at the same time, the word is a significant factor behind low CO2 emissions. As a matter of fact, husks and other plant-based residual products give the oil a bitter after taste, and they are therefore eliminated before the oil is pressed. The discarded material is turned into pellets in a small press and then used for heating and hot water at the factory. Around 70% of power consumption is supplied by 300 solar cells (60 kW) mounted on the roof.

In addition, we focus on a circular economy and support the Bornholm Regional Municipality’s “Bright Green Island” strategy, where we participate actively in relevant projects. We are members of the food cluster “Gourmet Bornholm” and Bornholms Landbrug & Fødevarer (Bornholm Agriculture & Food Products), as well as active in the local community by participating in events such as open house, the Lehnsgaard bike run, and by sponsoring various associations and sports teams. 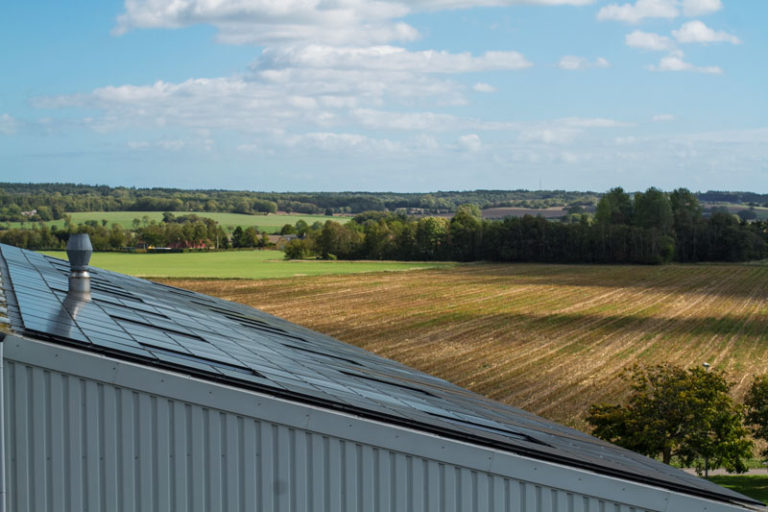 The rapeseed germ oil adventure first began at Lensgaard. Lehnsgaard is one of the oldest and most beautiful farms on Bornholm. The farm is located between the towns of Østerlars and Gudhjem, close to the largest of Bornholm’s famous round churches. The farm has a view of the Baltic and along the beautiful east coast of Bornholm. Lehnsgaard has an exciting history, and has at one time belonged to the crown, the noble Gagge family, and none other than Danish national hero, Admiral Niels Juel.
Read more about this fascinating history at www.lehnsgaard.eu

Hans Hansen bought Lehnsgaard in 1983, and after twenty years spent as a farmer, his desire and interest to develop an agricultural commodity had become so great that he bought the oil mill in Aakirkeby, and by doing so, he started Lehnsgaard Rapeseed Oil. All the rape is still grown and processed on Bornholm.

Henrik Kai Hansen is a native of Bornholm and grew up on the farm Kildesgaard. He began working in the field at an early age, and it was a given that he got a license to drive a tractor as a birthday gift when he turned 16. Today, after completing his training and a long career in industry, Henrik is co-owner, and together with Hans, it is a joint effort to pass on to the next generation the craftsmanship that surrounds the production of oil and mustard.

Her Majesty the Queens visit

In the summer of 2017 we had the great honour to receive Her Majesty the Queen at the Bornholm Oil Mill and demonstrate our production of rapeseed germ oil from the raw material to the end product.

This website uses cookies to improve your experience while you navigate through the website. Out of these cookies, the cookies that are categorized as necessary are stored on your browser as they are essential for the working of basic functionalities of the website. We also use third-party cookies that help us analyze and understand how you use this website. These cookies will be stored in your browser only with your consent. You also have the option to opt-out of these cookies. But opting out of some of these cookies may have an effect on your browsing experience.
Necessary Always Enabled
Nødvendige cookies er absolut nødvendige for, at webstedet fungerer korrekt. Denne kategori inkluderer kun cookies, der sikrer grundlæggende funktioner og sikkerhedsfunktioner på hjemmesiden. Disse cookies gemmer ingen personlige oplysninger.
Non-necessary
Alle cookies, der muligvis ikke er særlig nødvendige for, at hjemmesiden kan fungere og som bruges specifikt til at indsamle brugerens personlige data via analyser, annoncer, andet indlejret indhold, kaldes ikke-nødvendige cookies. Det er obligatorisk at indhente brugernes samtykke inden du kører disse cookies på din hjemmeside.
SAVE & ACCEPT